The National Fire Protection Association claims that office fires causes about $112 million in property damage every year. It is very important to prevent from such damages and loses, that can happen to anyone if there is no proper fire alarm system installed in the building. A proper level of fire safety and building protection is required for all businesses!

According to the latest NFPA report, U.S. fire departments responded to nearly 1,4 millions of fires. In general, these fires caused 3 390 deaths and 14 650 injuries between civilians. In the same period of time, 69 firefighters were heavily injured and 62 thousands got slightly hurt while being on duty.

The results presented in this report are based on fire incidents attended by public fire departments. No adjustments were made for unreported fires and losses (e.g., fires extinguished by the occupant). Also, no adjustments were made for fires attended solely by private fire brigades (e.g., industry and military installations), or for fires extinguished by fixed suppression systems with no fire department response. [Source: Research. Fire Loss in the United States During 2016, Hylton J.G. Haynes, September 2017 National Fire Protection Association].

In the report, there are two main categories of properties: residential and non-residential. First ones include single and multiple family homes, apartments, hotels, motels, dormitories and boarding houses. Second ones include all public assembly, health care, correctional institutions, schools, colleges, stores, offices, industrial and storage facilities and any other structure such as bridge or outbuilding. The report data shows that there were 104 thousands of non-residential fires in 2016 and 371,5 thousands of residential fire incidents. 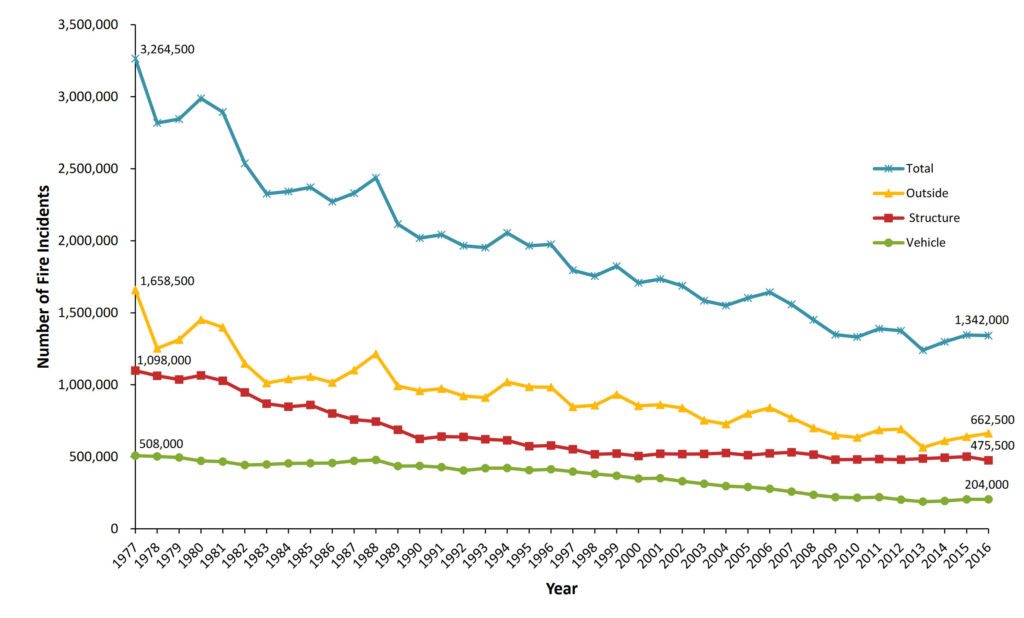 According to that, there were 2 800 civilian deaths in total in residential group. 2 735 deaths in home structure fires and 65 in hotels, motels or other residential occupancies.

150 civilians died in fires of non-residential structures. NFPA points that this number is a significant increase of 87 percent from the previous year. That means that all owners of non-residential properties need to put much more attention to fire alarm systems.

MAJOR STRATEGIES FOR REDUCING THE DEATH TOLL IN FIRES

First, more widespread public fire safety education is needed on how to prevent fires and how to avoid serious injury or death if a fire occurs(…) Second, people need to install and maintain smoke alarms and to develop and practice escape plans. Third, wider use of sprinklers must be aggressively pursued. Fourth, additional ways must be sought to make home products safer from fire (…) Finally, the special fire safety needs of high-risk groups such as African American children, older adults, the poor, and people with disabilities need to be addressed. [Source: Research. Fire Loss in the United States During 2016, Hylton J.G. Haynes, September 2017 National Fire Protection Association].

With many years of experience, Omega Pro Systems can help protect your business against any fire situation. We provide professional, full installation and maintenance services for the best commercial grade fire alarm technology and much more. If you want to install or just update your current fire alarm system, waterflow switches, pull stations, etc, we are able to deliver you reliable services at an affordable price. You can count on our quality 24 hour service that is always on time.

Our commercial fire alarm panels can be easily integrated with existing smart technology systems so owners seeking ultimate protection can get what they want and need. We are dedicated to providing fast and dependable service. Our highly trained technical team can perform installations on all major brands of fire alarm including, but not limited to: